If you’re looking for that combination of size, speed and strength on defense, look no further than the linebacking corps. These are the guys that will punish the offense and make plays happen. If you thought the Montreal Alouettes’ D-Line was going to be tough to beat, look who’s waiting for you on the other side!

One of the biggest hitters in this linebacking formation is a man whose father was a heavy hitter of his own when he played for the Montreal Expos. Winston Venable has turned in two fantastic seasons and can no longer be denied his spot on this roster. Registering over 100 tackles last year gave this All-Star the recognition he deserved and he was highly sought after when free agency started. But Venable only wanted to play in Montreal, the city that gave him the chance to shine. This man will lead in 2016.

Making his return to the lineup is Bear Woods, who has always been a threat down the middle. He was sidelined with a pec injury last season and his absence was felt. Very few play with his grit and his ability to make plays is like nothing else. It will be so good to see this dread-locked warrior back on the field for the Birds of Prey.

The veteran presence of Chip Cox and Kyries Hebert are also crucial to this Alouettes linebacking group. Cox is a perennial all-star and will greatly benefit from the motivation of Venable playing alongside him. Day in and day out, you feel the passion and determination in Cox’s play. And for all the talk of him being the old guy, you’d be hard-pressed to believe that Hebert is in his mid-30s! You can try to replace him, but you literally have to cart him off the field if you want his spot. Both Cox and Hebert will be crucial to molding the youth on this squad. 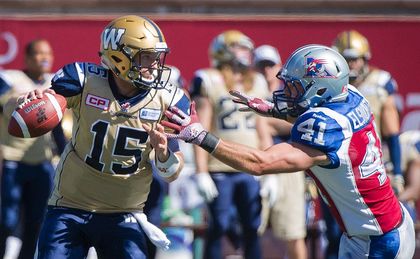 That includes young men like Nicolas Boulay, Kyler Elsworth and Nick Shortill, who were thrown into the fire when Woods went down to injury. Of the three, Elsworth has the edge in playing time and had himself a terrific game against the Edmonton Eskimos last season. He not only disrupted plays and laid out opponents in that game, but also scored his first defensive touchdown! As was often the case last year, the injury bug bit this young man and left Alouettes fans wanting more.

You cannot easily replace a talent like Woods, but both Boulay and Shortill did an admirable job and they will also be nipping at the heels of guys like Cox and Hebert. The two Nicks have played extremely well on special teams also and they will be given every opportunity to shine in camp. It won’t be easy to make people forget about a Henoc Muamba, but these young Nationals could very well surprise you.

He was pretty quiet last year, but Chris Ackie will have no choice but to step up and prove that he was worth one of the two first round picks in last year’s CFL draft. A natural DB, Ackie is now included in this linebacking corps and his physical gifts cannot be overlooked. I’ll be looking to see just how seamless this transition is and will he live up to the hype.

It seems impossible to think that there’s yet another level of punishment awaiting the opposing offense, but there remains the players who are often the biggest nightmare for the quarterback. Next up, the secondary.