It’s true what they say; You haven’t truly experienced the Canadian Football League until you see a game played live in Regina, Saskatchewan.

This past weekend, I got to finally scratch Saskatchewan off my CFL Bucket List by seeing the Montreal Alouettes post a 19-14 victory over the Roughriders. The win was nice, but in all reality there was nothing but pride on the line for both teams. Both have been eliminated from postseason contention earlier this month and instead showcased some of the future as these teams’ fan bases already look forward to 2017.

The real attraction was this classic stadium itself, which will be closing its doors for good after this Saturday’s game versus the BC Lions. When the Riders kick off the 2017 CFL season, they will be doing so in a state-of-the-art facility that is a mere 650 metres from the stadium that resides on Piffles Taylor Way.

The building of New Mosaic Stadium was announced in 2012 and shovels broke ground in 2014. In the next 23 months, the site on Elphinstone Street evolved from a mere dream into a 33,000 (that can be expanded to 40,000!) seat stadium that promises to offer a football experience like no other. While there is something to be said about the history of an old barn like Mosaic Stadium at Taylor Field, these new digs will be the standard-bearer for years to come when you talk about the stadia of the Canadian Football League.

I was fortunate enough to be given a private tour of New Mosaic Stadium while on my short visit to the prairies last weekend. The City of Regina has overseen the building of this new cathedral and needless to say, they were extremely proud to show it off.

What struck me right away upon walking inside was just how complete the building was as of October 2016. We have all heard of the delays that slowed the momentum for new stadiums such as Investors Group Field and Tim Hortons Place. Our tour guide was quick to mention that they have taken great lengths to ensure that a similar fate would not happen to the Roughriders and its fans.

When the Roughriders announced that 2016 would be the farewell season for the old Mosaic Stadium, it was with the knowledge that the new stadium’s construction was well ahead of schedule and that there would be no delays in its grand opening. Sure enough, not only is this stadium almost ready to go but they have already hosted a football game here!

Despite it being the home of the Roughriders, it is actually the Universities of Regina and Saskatchewan that can lay claim to playing the first official football game at New Mosaic Stadium. Access to the entire stadium wasn’t open to all and concessions were as barebones as you can get, but that didn’t stop over 16,000 fans from coming to have a sneak peek at the new joint.

On this tour, we got to see just about everything. And this is not your grandpappy’s stadium, Rider Nation. This is a building designed with the future in mind and with providing football fans with a great experience on game day.

Walking through the concourses, you are immediately drawn to how WIDE they are. There will be lots of space for fans to mingle about and make their way to their seats. And when they get to said seats, it won’t be old wooden benches. Each fan will get a seat of their own complete with cup holder and recessed seating, so your view of the field will be optimal regardless of where you sit!

This stadium is geared to the interactive experience, with a gigantic video board and Wi-Fi receivers all over the place. There will also be tons of LED ribbon screens throughout the stadium that will offer all kinds of information to fans in attendance. New Mosaic was also designed so that while you are in the concourse, you will still have a view of the playing field so as not to miss a moment of action.

The locker rooms are still being put together, but already you can tell that the players’ comfort was the biggest priority when they were designed. Each player will have a massive stall all to themselves and have plenty of space to move about freely. Chris Jones and his coaching staff will be able to address the entire dressing room with ease. 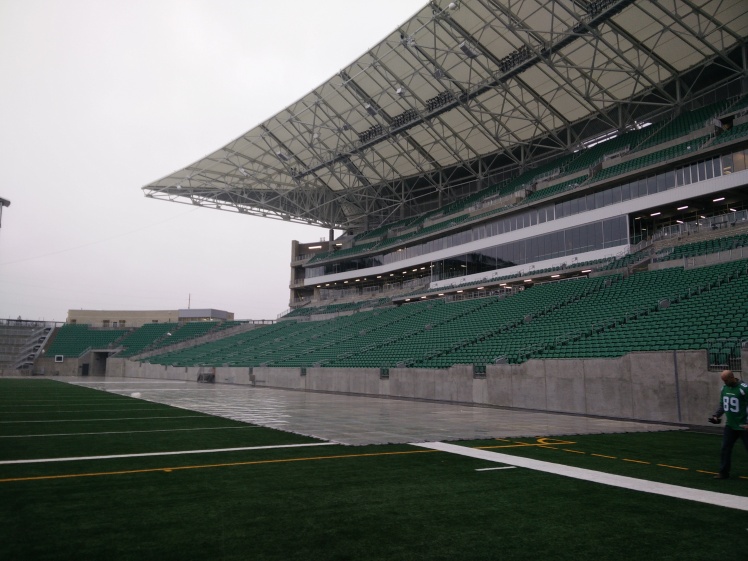 Of course, no stadium tour is complete without walking onto the football field! Stepping onto the same turf that Darian Durant and the rest of the Riders will do come June 2017, you can’t help but imagine how it will feel to hear the deafening roar of 33,000 screaming fans dressed in green and wearing watermelons. And the players WILL hear the fans as the playing field is installed below the stands. This ensures that like in Winnipeg and in most NFL stadiums, crowd noise will play a huge factor in the game.

While this is primarily a football stadium and people will be flocking to it to watch games at all levels, this is still very much a city-run building meant for all public use. There is lots of meeting space and areas meant for public gatherings. Concessions are still being worked out, but I expect to see this building to become the premier place in this entire province to put on a concert, exhibition or even a wedding.

This will be a true destination for ALL Canadian football fans throughout this country once they officially open this stadium in 2017. My thanks once again to Rod Pedersen and the Stadium Project group for arranging to have this Alouettes blogger get an in-depth look at this absolutely wonderful new stadium.

Rider Nation, get ready for an exciting new era for YOUR football team!

But back to the old stadium. Even though I was only there once and it wasn’t under the best of circumstances due to the torrential downpour of rain, it’s clear that for many people, this is what true football is all about.

Riders fans get a bad rap throughout the league; They’re boisterous and drink far too much Pilsner. Wearing any other colours besides green and white will get you heckled throughout your stay here. And if you happen to be from Montreal and in their house to support the Alouettes, you’ll hear all kinds of cliched epithets about poutine, smoked meat plus the French language in general.

But this is a proud fan base and despite the many rowdy fans, these folks live and breathe football. They celebrate all aspects of this Canadian game and swell with pride when it comes to their team and this league. Throughout the entire city, Rider Pride is very strong. Whether you wander into a restaurant for dinner, the casino for some gambling or even the corner store to grab a bag of chips, everyone is Saskatchewan is proud of their Roughriders. These citizens not only wear their hearts on their sleeve, but proudly drape themselves in green and white gear. Every single day.

That makes each and every game day an event all by itself. Regardless of the opponent, this city and even the entire province seems to grind to a halt for the three hours or so that the Roughriders spend on the field. This past Saturday’s game was sold out and even if only roughly 19,000 of the announced 30,223 were present, the noise they made certainly sounded as though every seat in this legendary stadium was filled.

A lot of history has taken place in this ancient building. Many of the Roughriders’ greatest moments took place in this rickety, leaky old barn. No doubt the pinnacle moment came in November 2013 when the Roughriders captured their 4th Grey Cup in front of a sold-out crowd filled with Riders fans. The entire province got to witness their sole professional sports team capture their championship trophy on home soil.

This Saturday will no doubt be a very emotional game for everyone involved. Generations of football fans have watched games here, wedging themselves into spots on the multi-coloured benches and often braving the iciest of temperatures just to see their beloved team play. Even though an amazing experience awaits them in just a few short months, it will no doubt be hard for the Riders faithful to say goodbye to an old friend. Despite this stadium being long overdue for retirement, Rider Nation will surely be a bit sad to see this particular chapter in Canadian football history come to an end.

I have no idea what is in store for Saskatchewan fans this coming Saturday as they gather one last time at Mosaic Stadium at Taylor Field. Yes, the team will likely bring out numerous football legends who had great success on that same field. People will likely try to leave the stadium with some piece of it as a memento of the great times they had watching the Riders play here.

There will be no trip to the Grey Cup playoffs this year for the Roughriders, but I imagine that the fans in attendance this Saturday will create an atmosphere that, if only for one day, will best demostrate to everyone else watching why this Saskatchewan team is so beloved throughout Canada and beyond.

Even if you are not a fan of the Saskatchewan Roughriders, you have to appreciate what this Saturday`s game will mean to the citizens of this province. For one last time, this creaky old building will come alive with fire and noise like never before.

With any luck, this Riders team will win this final home game played in order to provide one more fond memory for its devoted fanbase, as those same fans raise an adult beverage to the air to toast a grand old dame whose curtain will come down for the last time ever.

An exciting new era awaits this loyal fanbase in 2017. Not only will a new CFL football season get underway, but a new era in Roughriders football will also kick off as well. New Mosaic Stadium will be like nothing they have ever seen before.

And if you think that this Alouettes blogger is excited about the future of Canadian football in the prairies, wait until the citizens of this football-crazed province take their seats inside the new barn next June!

Thank you for sharing the Riders game day experience with me, Saskatchewan. I can’t wait to get back to Regina so I can see it all over again for the first time.

But as always, there’s only three possible words that I can use to end this column….