For fans of the Canadian Football League, Grey Cup weekend is why you remain or even become a fan of this ubiquitous sport. Whether you roll into the city on the Tuesday or take a cross-country redeye flight in on the weekend, being a part of this weekend only further solidifies just what the CFL means to you.

It goes far beyond who your favourite team or even favourite player is. Whether you base your livelihood on this league or are willing to part with your last dollar just to be a part of it, you can’t deny how easy it is to let it become a part of you. This league and everything that makes it great is easily condensed into one long alcohol-soaked weekend for you to partake in and be a vital part of.

Grey Cup weekend is all about celebrations, both big and small. Every event, party, concert, parade, festival and social gathering is planned out with one sole purpose in mind; To thank you, its fans, for believing in it and helping it grow into the pastime that we all love. Without people attending these Grey Cup weekends, the game on Sunday would be a colossal waste of time.

Simply put, you are the CFL. You help make the Canadian Football League into what it is and on this weekend, you celebrate it and they in turn celebrate YOU.

But the Grey Cup and the CFL are not without its faults as well. Many of the same people who were tasked with helping showcase the league spent the early part of the week denigrating it, almost mocking the efforts of the league and the city that was chosen to host this grand game.

When Toronto was named the host of this year’s event, it was in conjunction to what many felt was to be the revival of Canadian football in Canada’s biggest city. With the Argos now playing their home games in a more intimate setting, many were expecting this season to be another watershed moment for this Canadian league. Instead, as the Argos floundered in front of sparse crowds, the normal fever that can take over a Grey Cup host city ended up feeling more like room temperature water.

But when you host 3 of these “once in a lifetime” spectacles in a decade, it’s easy for even the most hardcore Toronto sports fan to become blasé about this great event. And it showed throughout the 2016 season as despite all their best efforts to promote this championship event, very few Torontonians barely lifted their heads to acknowledge it.

When I stepped off the train last Thursday into Toronto’s Union Station, I was immediately hit with news that almost set the tone for the entire weekend. Pizza Pizza, a national chain that has several locations throughout the country had a promotion at their 15 Hamilton-based restaurant where for $30, you could get a pizza, chicken wings, soft drinks and a pair of tickets to the Grey Cup game!

This should have been the greatest fear for everyone within the league offices; that the ticket sales for this game would be so dreadful that they would need to resort to promotional giveaways just to fill the stadium. The sheer optics of this only served as fodder for those who like to denigrate the CFL as being amateurish in their product both on and off the field.

Thankfully the CFL got wind of this pizza deal and shut it down fast. But it still remained a running gag throughout the weekend and I am certain fans who shelled out hundreds of dollars for tickets because of their love for this league must have felt like discarded pizza boxes in their own right; strong enough to get you home, then treated like garbage when the party was over.

While not a good look, blame for this fiasco must fall on the heads of the Toronto Argonauts, whose people were the organizers of this year’s championship game. When ticket prices were announced initially, there was a major outcry as they essentially charged the same amount for tickets as they had for the 100th Grey Cup game.

It’s one thing to gouge fans based on a centennial of this nation’s oldest championship and the sentiment behind it. But efforts to try to replicate that demand and subsequent price point blew up in the administrators’ faces, as fans balked at the cost and barely half of the tickets had been sold by November.

I’m not saying that the Pizza Pizza fiasco ruined Grey Cup for everyone, but as the night rolled on and going into the weekend, there was a sense that perhaps not everyone was feeling like they normally do for Grey Cup. Oh, there was events and parties happening as it has been since the day before forever. But even walking through the city of Toronto, it seemed hard to believe that such a great party was going on.

The mood started to shift with the CFL Awards on Thursday night. The premier event to showcase the best that this league has to offer helped kick-start the Grey Cup festivities. This event had a red carpet, tons of name players from the past and present and plenty of media attention. 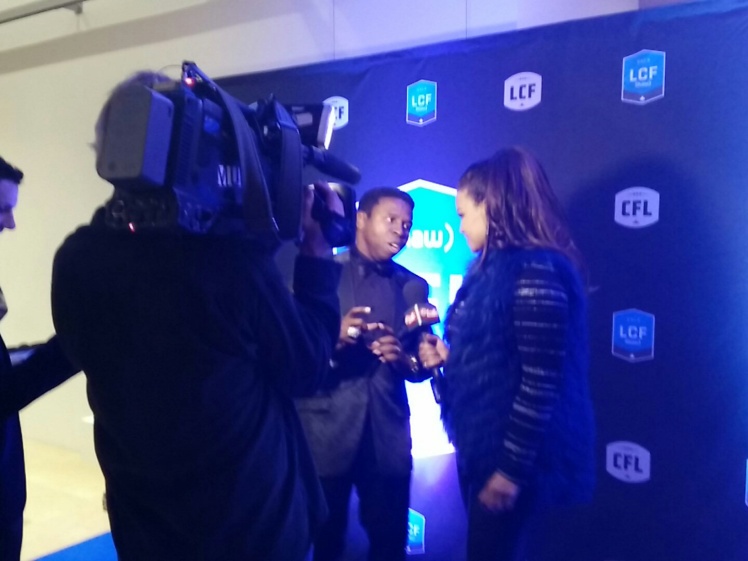 As expected, the Western teams swept the awards, including five Calgary Stampeders taking home the hardware. Stamps QB Bo Levi Mitchell was unanimously named the CFL’s Most Outstanding Player for the 2016 season. Stampeders head coach Dave Dickenson was named coach of the year and in a shocking turn, he received all but one of the available votes. So someone had to have voted for Ottawa RedBlacks head coach Rick Campbell, whose squad had a 8-9-1 record and benefitted from playing in the weak Eastern division.

Did someone really think that Campbell was the better head coach in 2016? The hope was that it was Dickenson himself who cast that ballot so as not to vote for himself. On the surface, it does seem odd that the coach who led his team to a 15-2-1 record wouldn’t be the unanimous choice as coach of the year. Chalk it up to some of the sheer wackiness that gives the Canadian Football League its own unique identity. 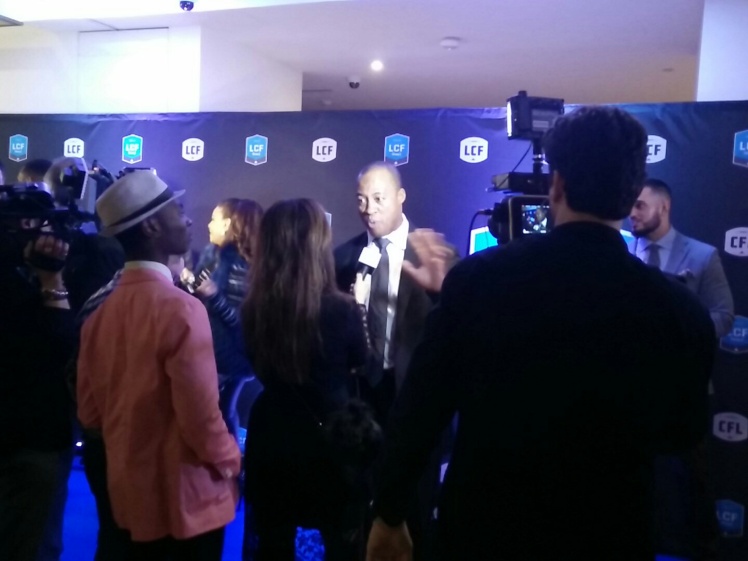 The rest of that first official evening of Grey Cup weekend is spent meeting old friends and making new ones, raising a glass to celebrate (or lament) the season that was and looking forward to a great weekend to come. Some folks had already partaken too much alcohol and already questions of how so-and-so was doing were asked due to their inability to hold their liquor.

As many Grey Cup veterans will tell you, it’s a marathon and not a sprint.

The star of Grey Cup Friday is the league’s commissioner, as he faces not one but two firing lines as he delivers the State of the League address. There’s one for the mainstream media and one town-hall style event where the fans are invited to not only hear from the commish, but they can also ask him questions as well.

This event really took off in years previous with the advent of former CFL commissioner Mark Cohon being such a warm, engaging fellow to sit and talk football with. Current head honcho Jeffrey Orridge has not done nearly as well in replacing Cohon for that buddy-buddy feel between he and the fans of this league.

But he certainly tried as he engaged the host of the event, TSN’s Matt Dunigan, in an impromptu push-up contest much to everyone’s delight. And Orridge certainly tried to come across as responsive to the fans’ questions, even if they were long-winded in their delivery and essentially covered the same topics as in years previous. You can guarantee that the topics of referee accountability, expansion to the Maritimes and when will we see this league become more relevant in the city of Toronto as surefire questions to the commish year in and year out.

To his credit, Orridge was good at answering and also deflecting a lot on topics that he felt he couldn’t or shouldn’t answer. At the end of the day, he is responsible to his bosses (All 9 of them!) so he’s certainly not going to talk out of turn just to please the fan dressed head-to-toe in Ticats gear. But he presents the numbers and the facts in as clear and clean a message as possible.

The one message that rings out is that this league is changing as much as possible to meet the new, younger fans where they are. The numbers on social media are growing at an incredible rate and the CFL is planning to meet their next generation of fans there. The league is branching out to new mediums via their relationship with ESPN and reaching areas previously not considered such as countries in Europe.

And as this league continues to grow its online presence, they will meet the challenge of taking the game mobile so that people are no longer tethered to their TVs, but rather they can take the CFL with them wherever they go. This league is growing and changing and they want you along for the ride!

By the time Friday night rolls around, the vast majority of the fans have arrived for the weekend and are ready to party! So where do they go?

Everywhere! By this point, just about every party has gotten underway. This year, every team was represented with a party of their own. Some go for several days, like Spirit of Edmonton. Others are just one day events. But all have the same goal in mind; to socialize with old friends and make new ones along the way. 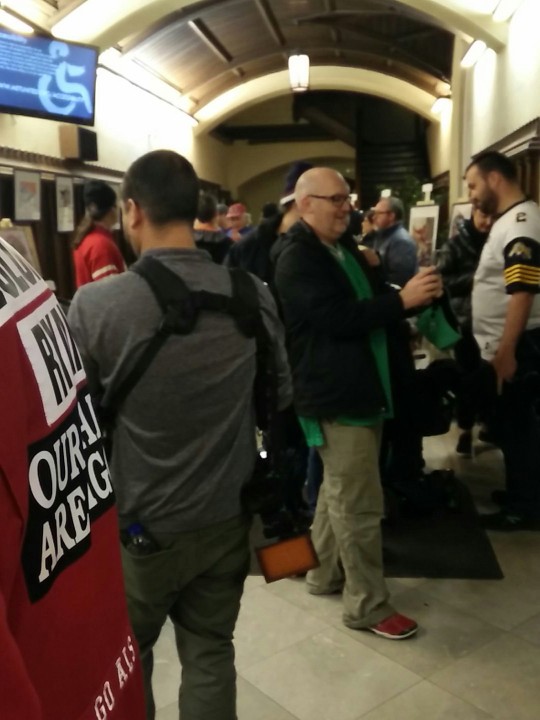 When you come to Grey Cup weekend, you will find CFL players all over the place. They are at the festivals, they are walking down the street and they are at all the important events leading up to the game itself. And no one is unapproachable! Make sure your cell phone is charged for that selfie and you have a Sharpie with something to sign ready to go.

There’s still tons more of this wonderful weekend to share with you all. Be sure to check out Part Two of this ALSternative look at the 104th Grey Cup.