For football fans, this month represents one of the worst times of the year; there is NO football of any kind being played. The Super Bowl has been handed out and indoor football doesn’t start for a while. For gridiron fans jonesing for some action, these dreary days of winter just feel longer and longer.

But starting this Tuesday, all you armchair GMs can get excited as the entire Canadian Football League will be open for business. On February 13th at noon, free agency gets underway and all nine CFL general managers will have their shopping lists ready and their pens full of ink, ready to sign some new talent to a contract.

We find ourselves in an interesting period of time, as the collective bargaining agreement between the league and its player’s association will expire in 2019. And with the players and teams already at loggerheads at what they currently can/cannot do, it will make for an interesting negotiation.

Players feel that the teams have far too much control over them, both from a financial and contractual point of view. Teams contend that without the opportunities that they provide, these same players would never be given the chance to shine. While I don’t foresee a labour stoppage ever happening, it will be something to give consideration to when the Grey Cup is handed out in Edmonton this coming November.

So when free agency gets underway, expect to see a lot of one year deals as players would rather wait to see what the landscape holds for them in 2019. Also, if any of these players have the opportunity to make a go of it in the NFL, then the last thing they will want is to be hamstrung by a contract that favours their employers more than themselves.

With all that said, let’s take a look at what the Montreal Alouettes have done so far this off-season and how that will impact who general manager Kavis Reed decides to pursue this coming Tuesday.

The first off-season move made was a trade that sent defensive lineman Gabe Knapton to the BC Lions in exchange for wide receiver/kick returner Chris Williams. This was a bit of a surprise move from both teams but after sub-par seasons from both players, perhaps a change of scenery was needed for all.

Knapton slowed down a bit last year but also had to deal with losing his defensive coordinator mid-season and a team that was just dreadful. Williams was playing again after suffering an ACL injury but just couldn’t find his form on the Left Coast, becoming a mere afterthought. I think both players will respectively flourish with their new teams.

Where Williams will be intriguing for the Alouettes to me will be as kick returner; both he and T.J. Graham can be a major threat on special teams. Stefan Logan is still a part of the Alouettes and has done a great job turning back the clock since his arrival. But Father Time remains undefeated and the Als do need to get younger in many areas, so I have my doubts about Logan being around much longer.

The Alouettes then set their sights on extending players who were due to become free agents, ensuing they would remain with Montreal in 2018. The biggest name on that list was Tyrell Sutton, who was grossly underused yet still managed to put together a solid campaign. With over 1000 all-purpose yards and visiting the end zone six times, Sutton was one of the few bright spots the Alouettes had in 2017. 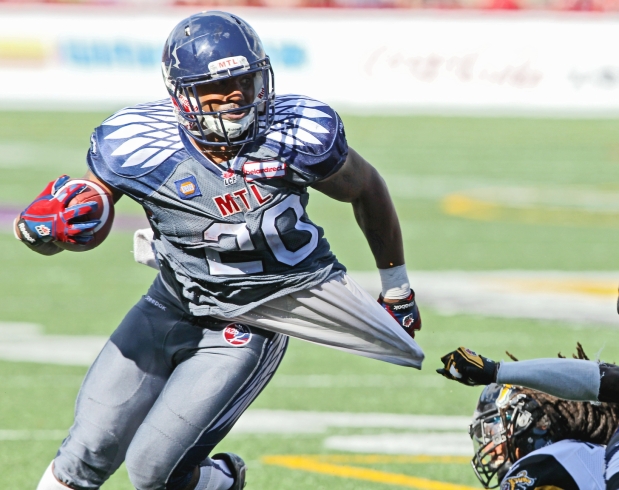 With Sutton making the 514 his year-round home, he will no doubt be given more of a chance to shine with new offensive coordinator Khari Jones leading the way. If he can stay healthy, Tyrell can easily return to the superstar form that he had for Montreal in 2015 when he led the CFL in rushing yards.

Next, the Alouettes shored up their defense with the re-signing of a pair of talented National players. Both Chris Ackie and Michael Carter will be back with redemption on their minds. Ackie was poised to be the Als’ safety of the future before suffering a season-ending injury last July. Carter returned to the Alouettes in 2017 after stints with other team, including winning a Grey Cup with Edmonton. Ackie’s best football is still ahead of him and Carter will help DB coach Billy Parker mold the young secondary with some veteran leadership.

Montreal then traded running back Brandon Rutley to the BC Lions for a player off of their negotiation list. Seeing how misused the Alouettes’ ground game was in 2017, Rutley wasn’t given too many chances to shine. But he always brought his A-game and when Sutton was out of the lineup, Rutley put his speed and hands to good use. Perhaps Montreal has their eyes on another CFL back who is about to become a free agent this Tuesday? I guess we shall see.

More National talent was extended with veteran Martin Bedard and youngster Mikaël Charland putting pen to paper. Bedard has been the Alouettes’ long snapper for many years and helped the Alouettes win back-to-back Grey Cup championships. Charland hasn’t had the opportunity to prove himself consistently but he also brings championship experience to the team, having won a Grey Cup with the Ottawa RedBlacks. A mere pup at 26 years of age, Charland will be given the chance to grow and contribute to this new-look Alouettes team.

In a puzzling move, the Alouettes traded Jean-Christophe Beaulieu to the RedBlacks in exchange for former Alouette Patrick Lavoie. I say puzzling because while Lavoie is certainly a talented and very durable player, Beaulieu is an offensive powderkeg just waiting to go off. The Alouettes lost Lavoie to Ottawa in the 2013 expansion draft, leaving him unprotected due to uncertainty with some injury issues. While I have no doubt Lavoie will be a good weapon to have in Montreal’s lineup, I don’t believe it should have come at the cost of the younger and cheaper Beaulieu.

The much-maligned offensive line got a boost this past week with the re-signing of National guard Philip Blake. It’s hard to believe that the O-Line was actually a solid force to start the season last year, not allowing any QB sacks for the first three games. Had injuries to the big men not taken their toll, perhaps the Alouettes’ story in 2017 wouldn’t have been the tragic tale that it turned out to be. A healthy Blake lining up with Jovan Olafioye and Luc Brodeur-Jourdain will be crucial to any success that the Alouettes’ O-Line has in 2018.

So we know who is staying (or got traded away). Who is still needing to be kept?

The fate of some of the names on Montreal’s free agent list has already been decided. But of those remaining, here’s who I feel the Alouettes would be wise to get locked up before Tuesday:

1. Dominique Termansen: The undrafted stud from Vancouver had a terrific rookie campaign and was expected to become a major player in the Alouettes’ secondary in 2017. But the dreaded sophomore jinx reared it’s ugly head in the form of injuries to Termansen. His ability to read opposing quarterbacks and be disruptive at cornerback is truly something else. With still such a high ceiling, I expect ‘Nique to be on someone’s training camp roster if Montreal foolishly decides to move on from him.

2. Xavier Fulton: It was reported last week that new deals for both Fulton and kicker Boris Bede were very close to being done. If so, that will be a huge relief for Montreal’s O-Line. Fulton only played in five games last season but he’ll provide veteran leadership and will help the development of youngsters like Philippe Gagnon and Sean Jamieson. Re-signing Fulton will also allow Jovan Olafioye to move to his more natural position of right tackle.

3. Reggie Northrup: Montreal’s linebacking corps desperately needed some youth in 2017, despite the ageless Kyries Hebert having another phenomenal season. Chip Cox was not the player he used to be and ended up on the “retired” list. Taking his place was Northrup, who was able to make some solid defensive plays in his limited playing time. A former standout from Florida State University, Reggie racked up 22 defensive tackles in only four games played with the Alouettes. With him and the equally impressive Branden Dozier playing in the middle, I can see a lot of lumber being laid out on the field in 2018 and beyond.

4. Tevaughan Campbell: Acquired in the deal that sent quarterback Vernon Adams to the Saskatchewan Roughriders, Campbell looked out of place more often that not in the Alouettes lineup. But I think it’s fair to say that everyone on the Alouettes pretty well looked out of place at times in 2017. What can’t be denied are Campbell’s physical gifts, which has him moonlighting as a member of Canada’s Rugby Sevens team. His size and speed are truly spectacular to watch on any field. With any luck, new defensive coordinator Khalil Carter can find a suitable role for this gifted Scarborough native.

5. Ivan McLennan: You likely don’t know his name just yet. But like so many other Alouettes, his will be one to keep your eyes on should he be re-signed. Still only 24 years old, McLennan brings a lunch-pail work mentality to the defensive line. As we wait to see whether John Bowman calls it a career or not, McLennan can be that rush end of the future Montreal will need no matter what. Big enough to battle with the O-Line yet fast enough to reach the quarterback for a sack, McLennan will relish the opportunity to establish himself on any team that signs him. May as well be the CFL team that gave him the first chance to do so.

Signing these players won’t equal instant success, but they would be wise moves that wouldn’t break the bank. It will be interesting to see just who will be considered when you factor in an entirely new coaching staff for the 2018 Montreal Alouettes.

Free agency will answer a lot of these questions. How much film has new head coach Mike Sherman gone through and has he seen enough of the current roster to decide who stays? Or does he know enough to know who to cut loose and then tell Kavis Reed to go out and get?

When a football team can only muster three out of eighteen potential wins, you better believe changes are coming. It starts with the coaching staff, but ultimately it’s the players who are the ones out there doing the work that will hopefully lead to them still playing in late November.

And if Coach Sherman and Kavis Reed decide to go in a different direction, then who will they target? We’ll know for sure starting on Tuesday at noon. Until then, all we can do is speculate.

Tomorrow, I will take a look at who I would like to see the Montreal Alouettes target in free agency. I’ll also go more in-depth with who the Alouettes have added to their lineup in the off-season as well as who’s been served their walking papers.

Who do YOU want to see in Alouettes colours come Tuesday? Hit me up on Twitter and let me know what potential name(s) jump out at you.

It’s rough not being able to watch any live football after the first weekend of February. But CFL Free Agency means that we are getting just a little bit closer to the start of a new season. There will be a lot of changes made for many reasons. Yet the end goal for all teams are one and the same: Playing for and winning the Grey Cup.

See you back here tomorrow with Part Two of The ALSternative’s look at 2018 CFL Free Agency!